Catalonia, with the coordination of Biocat, has taken a notable participation in projects and events of international standing with the aim of projecting and promoting the enterprises and research bodies on the key life sciences markets.

During 2012, it has prioritised the emerging economies of Brazil and China as key markets and for cross-border cooperation. Of particular note has been the Catalan participation at the BIO International Convention (18th-21st June in Boston, USA) the main international convention for the sector; the partnering meetings BIO-Europe Spring (19th-21st March in Amsterdam) and BIO-Europe (12th-14th November in Hamburg), where Biocat was a Gold Sponsor; and Biospain (19th-21st September in Bilbao) with a total presence of more that 200 delegates from 119 Catalan enterprises and entities.

Biocat has formed part of initiatives such as bioXclusters (2012-2013), a development project with the support of the European Union which grouped together four leadership clusters in biotechnology and health with the aim of promoting the internationalisation of the SMEs from this region into the strategic markets such as the United States, Brazil and China. It has also participated in international cooperation and technological transfer projects (see the section on Emprenedoria i innovació), such as Bilat 2.0, ETTBio, Interbio and HealthTIES.

Under the banner of the European Diagnostic Clusters Alliance (EDCA), created in mid-2011, which promotes the internationalisation, competitiveness and collaboration between SMEs working in in-vitro diagnostics, it carried out the mapping of the different players in the sector (29 companies and 52 research groups) and it has sought European funding for the promotion of collaborative projects. It has also participated at the 4th Forum In Vitro Diagnostics at Charité University (8th June, Berlin-Brandenburg, Germany) and at the Euromediag Convention 2012 (5th-6th July, Montpellier, France), where Biocat coordinated a round-table meeting and promoted the participation of Catalan companies (Biokit, Roche Diagnostics and Oryzon Genomics).

The other international network in which Biocat participates is the European Council of Bioregions (CEBR). In 2012, the Director General of Biocat took on the presidency and defined the action plan for 2013-2014. On January 16th and 17th the Annual meeting 2012 of CEBR was held in Munich (Germany).

Throughout 2012 Biocat has welcomed various visits from international delegations to exchange knowledge, information and begin collaboration. Notable among these are the clusters such as the Shanghai Juke Biotech Park, and the organisation for the promotion of innovation Valetec (Rio Grande do Sul, Brazil). Meetings have also been held with the Thailand Board of Investment (through Barcelona Activa) and with a delegation of Danish investors organised by the public company Kjeller Innovasjon. 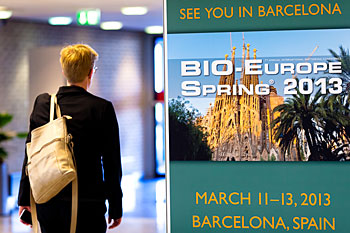 With an eye on staging the event in Barcelona 2013, Biocat and various Catalan enterprises and bodies have actively participated in the spring and autumn editions of the main European partnering meetings of 2012,  Bio-Europe Spring (BES) and BIO-Europe (BEU).

The spring edition was held from 19th to 21st March in Amsterdam (Netherlands) with the presence of 26 businesses and bodies from the BioRegion (57% of the total Spanish representation). In addition to coordinating the Catalan participation, Biocat was a Gold Sponsor of this meeting and had a presence with a stand in the exhibition area.

The autumn edition took place in Hamburg (Germany) with the participation of more than twenty Catalan biotechnology and pharmaceutical enterprises (40% of the total number of Spanish companies participating). Biocat presented the Catalan biocluster through one of the International Seminars under the title Catalonia: Building a competitive hub.

The presence at BES and BEU 2012 served also as a springboard to promote the holding of a new edition of the meeting in Barcelona in 2012, jointly led by Biocat and the Barcelona City Council. In this regard, the most notable actions carried out were:

Organised by the company EBD Group, the BES annually attracts the main leaders from biotechnology and pharmaceutical sector of Europe (71%), North America (20%) and Asian countries (9%).  The venture capital companies have recognised the opportunity which this presents and in 2012 increased their number of representatives in order to explore the business opportunities, establish contacts and become involved in new projects. The 2012 edition ended up with 44 countries represented, 67 exhibitors, 1,291 companies (an increase of 15% on 2011), 2,172 delegates (an increase of 20% on 2011) and more than 10,000 one-to-one meetings.