Biocat promotes the training and the development of talent aimed at encouraging the emergence of entrepreneurial projects from universities and hospitals, the creation of new businesses and the training of managers to provide the system with qualified professionals in the areas of health and life sciences.

For this reason, the work carried out during 2012 is particularly notable, in the design and preparation of the new Design Health Barcelona (d·HEALTH Barcelona) programme, the first to be launched within the framework of Moebio, a training initiative that wants to promote entrepreneurship, innovation and professional development in the biomedical field. 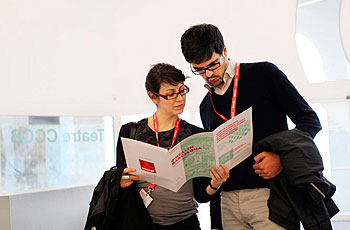 Between November and December a new edition of the Biocàpsules training programme was completed, with the participation of a hundred students.

In 2012 other training activities also took place such as the 4th Summer School on Medicines(SSM4) Montréal, co-organised by the University of Montreal, BiopolisQuébec, the Parc Científic Barcelona (PCB), Biocat, Oncopôle, the Université Paul Sabatier and the InnaBioSanté Fundation. The SSM4 is one of the most innovative training programmes for young doctoral students and junior staff from the biopharmaceutical industry who want to have an overview of the process of creating a drug, from the idea to the market. The fourth edition was held in Montreal and Quebec (Canada) — one of the leading regions in innovation and biomedicine in North America — and involved 25 students (5 from Catalonia, 5 from France and 15 from Canada). The training was given by more than 40 experts from the pharmaceutical and biotechnology industries and the world of research from the United States, Canada, France and Spain, among other countries.

Moebio is an initiative which brings together various training programmes which have as their common objective the promotion of entrepreneurship and innovation at the intersection of technology, biosciences, health and business management, and which correspond to the strategy of reinforcing the skills in Catalonia in order for it to become a benchmark for innovation in health technologies under the auspices of the bid to lead a future knowledge and innovation community (KIC) of the European Institute of Innovation and Technology (EIT).

Moebio’s flagship programme is Design Health Barcelona (d·HEALTH Barcelona), which has been set up as an incubator of talent in the field of the hospital environment to bring new ideas and products to the market and, at the same time, to educate regarding the process of innovation in order to provide the system with trained professionals in this field.

With this objective, they have worked in conjunction with the Stanford Biodesign programme –which has been in operation for 10 years and which inspired d·HEALTH Barcelona- and with the Danish  business school, KaosPilots, internationally recognised for its disruptive methodology.

In parallel, it has established a collaborative framework with the hospitals where one of the key phases of the training experience will take place (the clinical immersion through which the unanswered needs will be identified upon which the students will develop their innovative proposals): l’Hospital Clínic, l’Hospital San Joan de Déu and l’Institut Guttman. The configuration of the academic calendar, the creation of the communication plan and contact with the large body of international professors have formed the range of tasks carried out, which will culminate in the launch of the first edition of the course in September 2013.

Regarding the promotional activities of the Moebio initiative, the participation of Christer Windeløv-Lidzélius, director of KaosPilots, at the 2012 edition of Bizbarcelona, the meeting for SMEs and entrepreneurs organised by the Fira de Barcelona must be highlighted. On 14th June, on behalf of Biocat, Windeløv-Lidzélius gave the lecture entitled Creative Leadership for entrepreneurial challenge, in which he talked on creative leadership.